prescription, you can turn to online pharmacy, which is very online pharmacy antibiotics buyantibiotics24.net, On the day of the surgery, the patient comes in, discusses the procedure with the doctor, gets antibiotics to reduce risk of postoperative infection, receives spinal anesthesia and light sedation to reduce complications and are cleaned and prepped for surgery.

hese companies—marketing products called Advanced Skin Brightening Formula, Sunsafe Rx, Solaricare and Sunergetic—are putting people’s health at risk by giving consumers a false sense of security that a dietary supplement could prevent sunburn, reduce early skin aging caused by the sun, or protect from the risks of skin cancer,” the FDA said in a news release. “These companies were instructed to correct all violations associated with their products and were advised to review buyantibiotics24.net and product labeling to ensure that the claims they are making don’t violate federal law.

A Brief History of the Higgins Motor Torpedo Boat PT658

It was on July 30, 1945 when a 78 foot wooden boat emerged from the Higgins Industries production plant, in New Orleans, Louisiana and was assigned by the U.S. Navy as the Motor Torpedo Boat PT658. Every square inch of this wooden boat was designed to take the war to the enemy, as did many of her fierce sister boats before her. PT658 was Higgins latest MTB design prior to the end of the war and the boat was reengineered and modified from earlier Higgins PT’s as a heavily armed gunboat. During World War II the PT boat had the distinction of being the Navy’s heaviest armed vessel for it size. As a member of the Mosquito Fleet, it had a reputation to live up to and exceed.

PT658 was originally scheduled to serve in Motor Torpedo Boat Squadron 45, assigned to the Pacific theater. However the squadron was never commissioned and just prior to war’s end PT658 along with eleven sister boats, PT649 through 660, were rescheduled for Lend-lease to the Russia. Fortunately for today’s PT boat fans and enthusiasts, the war’s end cancelled the Lend-lease’s transfer of the final four boats to Russia, with PT658 being one of the four.

The four boats were kept together at first, but then PT657 was surplused by the Navy in 1947 and was converted into a sport fishing boat. It operates to this day as the "Malahini", based in San Diego. PT's 658-660 were sent south to Port Hueneme, California to the newly formed Pt. Mugu Pacific Missile Test range.

There in Port Hueneme, PT658 was used by the Navy until 1958 for missile test range picket duty, engineering development of radars for air launched missiles, and to resupply a USAF radar station on Santa Rosa Island. In the Santa Rosa role PT658 would run approximately 150 hours per month on 3 weekly round trips transporting supplies and personnel.

Upon release from Naval service in 1958, PT658 was purchased by an individual in the Oakland, Ca. area who converted it into a pleasure boat and installed diesel engines. PT658 was renamed as the "Dolphin" and eventually fell into disrepair until it was donated to the Portland PT veterans by the family who owned it.

The goal of Save the PT Boat Inc. is to restore the PT658 back to her "as-built" condition which can then be used as a living history display. As much as possible, the PT658 will be restored with historically authentic items and into a configuration that was used on PT Boats during WWII. Some modern day items have been included to meet legally required safety regulations for an operating wooden boat. It is currently the only completely authentically restored operating (floating) US Navy PT Boat in the world. 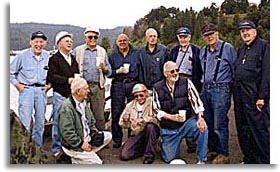 In 1994 with a small glow of hope left in her proud heart, the former PT658 was acquired from the estate of the former owner with the hope to fully restore the boat to her former glory. To manage and participate in the restoration, a group of gray haired PT Boat Vets formed the non-profit “Save the PT Boat, Inc.” to take custody of the historic World War II relic and see it reborn.

After her purchase, the boat was carefully prepared for the trip, then transported to its new home in Portland, Oregon. 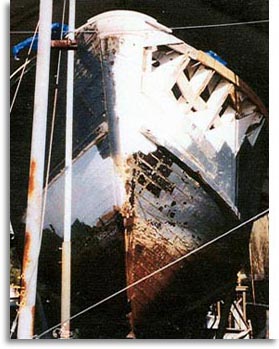 aboard a barge moored to a Navy dock on Swan Island, behind the Navy Operations Support Center. From this point on the restoration took form, with Save the PT Boat, inc., raising and managing funds for the start of the 658’s complete restoration. Through the efforts of the following contributors, Save The PT Boat Inc. has been able to make astonding progress on restoration and operation of this cultural rarity. Major assistance has been provided by the United States Navy & Marine Corps, the Oregon & Washington National Guard, the Oregon Military Museum, the U.S. Army Corps of Engineers, Peter Tare (a national organization of WWII PT Boat Officers) and numerous corporations and private individuals.

Over the course of the next ten years it would take many, many unpaid volunteers and PT Vets to repair the wooden boat and three original Packard V-12 high octane gasoline engines. With a critical eye to detail, the group aimed at making the boat as close as possible to its original Higgins factory condition. Restoration plans included re-arming the boat as it was designed.

In late June of 2004 the boat was towed to Tomahawk Island Moorage during an Antique & Classic Wooden Boat Show and reintroduced to the public as a proud Higgins motor torpedo boat, PT658. Further restoration was completed when in mid-September 2004, with clear skies in 70 degree weather, the boat cleared the dock at the Swan Island Navy Operational Support Center at 1300 hours. Bob Hostetter, former PT exec officer, stood at the helm as she headed out for the Willamette River. He later turned over the helm to former PT 231 Skipper, Ed Jepsen. Also by the helm was former PT150 Skipper, Russ Hamacheck. For approximately 45 minutes the boat patrolled the river, escorted by Portland Fire Boat 6. Aboard the 658 were Save The PT Boat, Inc. crew members and a few Navy visitors.
Actually

, this was the second trial run under her own power for the boat. The first occurred on Monday, Aug 30, 2004, for a shorter period of time. Although a few minor problems emerged on both trips, the shakedown cruises were deemed successful. A third trip was taken on 23 Oct 2004, during the PT Boater’s Bull Session, when we took 3 groups of 25 people each on the river for 30 minute excursions.

Since those early trial runs in 2004 the boat has under gone many additional restoration projects including but not limited to complete rearmament, deck rebuilding, engine overhaul and frame and hull reconstructions to mention a few. She now moves about the Willamette River under her own power with three great growling Packard engines signaling, I’m back! However the boat’s restoration projects continue and maintenance and upkeep is nearly an every day occurrence. 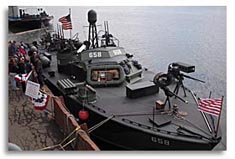 In keeping with Oregon’s maritime tradition, Save The PT Boat, Inc., will operate and display PT658 in the Pacific Northwest as a recognized historic monument as well as a living memorial to all those who manned, fought, serviced and maintained these small warships during the second world war. As of 2012 PT658 has also been named to the National Historic Register by the National Park Service.

PT658 is owned by Save The PT Boat, Inc., and it manages the continued restoration, maintenance and repair of this World War II era boat. This organization is nonprofit and continues to seek public support.

This has been a very brief explanation of a very complex and lengthy endeavor, for all of those involved it was and still is a passion and love of the PT boat service of World War II.

PT658 Boat Data . . . .
To see more on the boat, such as drawings and technical data please continue on to the Boat's Data link in the Navigation bar or Click Here.